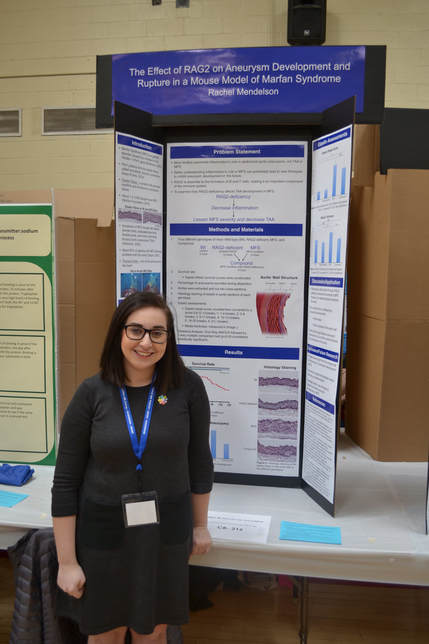 Title: Characterization of an in-vitro System to Study the TGF-beta Pathway in Marfan Syndrome

Abstract:Marfan Syndrome (MFS) is a genetic disorder of connective tissue caused by mutations in the Fibrillin-1 (Fbn1) gene. This mutation largely affects the skeletal, ocular, and cardiovascular systems as well as leading to weak connective tissue. This fragmented and disorganized connective tissue can be very dangerous to many body functions and can potentially lead to death in the case of a thoracic aortic aneurysm (TAA). Transforming growth factor beta (TGFβ) is a cytokine that has been shown to increase as a result of the Fbn1 mutation, hence contributing to the detrimental effects associated with MFS. Despite many studies on the role of the TGFβ signaling system, the mechanisms of this signaling system are largely unknown. Therefore, the goal of this study is to create a successful in-vitro system to study the TGFβ signaling pathway in MFS-like aortic cells in order to create potential therapeutic agents for individuals with MFS in the future. Human Primary Aortic Smooth Muscle Cells (hASMCs) were used and cells were cultured in SMGM2 media. Cells were also transfected with different conditions of TGFβ to see how these different conditions affect the production of Fbn1. These cells were then collected and western blot and immunofluorescence analysis were completed. In conclusion, a beneficial in-vitro study was established to further examine the TGFβ signaling system. In addition, increased TGFβ showed to potentially increase Fbn1 production, which could be essential for future studies to create new therapeutic agents to prevent aneurysm development.
​